Chocolate Trifle with Brownies and Toffee 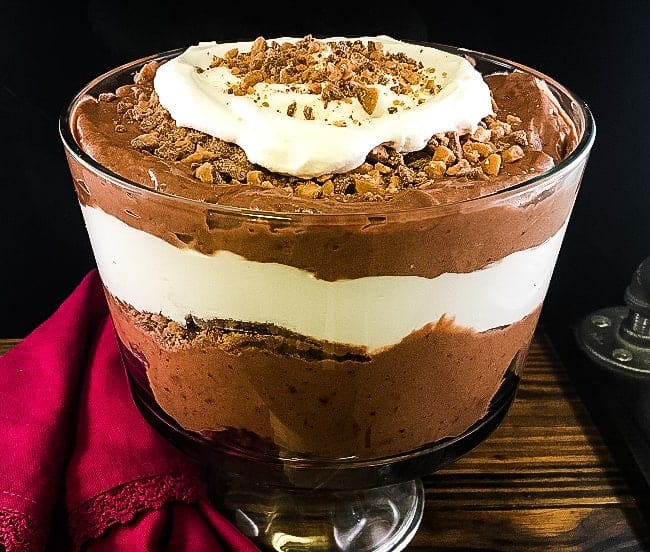 Welcome to My Kitchen Serenity!  My most requested dessert is this brownie trifle with toffee bits and it all started at a fantasy football draft party.  There’s something so eye pleasing about a chocolate layered dessert. Ever since that very first time I brought this trifle to a fantasy football draft, it became a tradition.  Also referred to as death by chocolate trifle, everyone wanted and expected me to bring this decadent chocolate dessert to the draft party every single year!  There was never a drop left over!

It’s really an easy dessert to put together.  You can make and bake your own brownies.  This recipe uses the family size brownie mix in a box.  However, it’s perfectly fine to buy the pre-made brownie bites available at your local grocery store.  The hardest part is not wanting to “sample” the brownies while assembling the trifle, which we do every single time.  It’s so hard to resist brownies when they’re right in front of you.  So go ahead and have a taste because it won’t matter and you’ll be glad you did. HaHa!

Bag of toffee bits and pieces

How to Make It

It’s really just a matter of making the brownies and chocolate pudding and layering with the cool whip and toffee bits in a trifle bowl.  Trifle bowls are usually easy to find in most stores that sell kitchen goods.  I like this trifle bowl from Anchor Hocking; it must be at least 15 years old. You can buy heath bar toffee bits and pieces in a bag.  When I first made this trifle, many years ago, I actually bought the health bar candy bars and put them in a plastic bag and pounded them with a hammer to get the bits and pieces.  Now, you can buy them pre-chopped.  Actually, you can use your favorite candy such as m&ms, peanut butter cups, etc.  You can’t go wrong with your favorite candy.

If it’s a holiday like Halloween, you can use candy corn as a topping.  If it’s Christmas, you can use the red and green m&ms.  For Valentines Day, use the candy hearts.  I’m not a creative person, but THIS I can handle!

Once you have all the layers complete, cover with plastic wrap and refrigerate for at least a couple of hours.  Overnight seems to work a little better, but it’s not mandatory. This is truly the best dessert because it’s chocolately, pretty, delicious, crowd pleasing, versatile, and most of all EASY!

Chocolate Trifle with Brownies and Toffee

If you try this trifle recipe, please let me know what you think.  I’d love to hear from you!

Want some easy dinner ideas?  You may want to try these recipes:

Red Beans and Rice with Sausage

Welcome to My Kitchen Serenity! 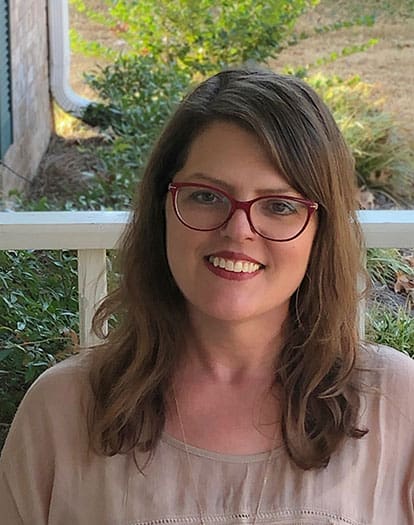 Hi. I’m Anne and I’m happy to share with you my easy, family friendly recipes. I’ve been cooking for my family for 30 years, and what I’ve learned is that most busy families appreciate easy, homemade meals. Now that the kids are grown, my passion is creating and sharing flavorful food for you and your family to enjoy as well. If you ever have any questions, feel free to send me an email at [email protected] I’d love to hear from you!