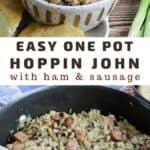 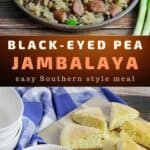 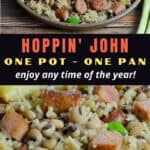 You're going to love this easy Hoppin' John recipe with canned black-eyed peas, ham, and sausage! As an added bonus, it's one pot, one pan, meaning clean up is a snap. This recipe is also known as black-eyed pea jambalaya and is about to knock your socks off.

Welcome to My Kitchen Serenity!  As we draw closer to a new year (yay!), I'm already thinking about eating all the traditional "good luck" foods. I don't know about you, but I'm thinking 2021 needs all the good luck we can throw at it!

Read on below for a full smattering of all the lucky foods you should be working into your New Year's menu.

What is "Hoppin' John"

Hoppin' John, also known as Carolina Peas and Rice, is a traditional Southern dish that consists of black-eyed peas (or field peas), some kind of pork product and rice. Hoppin' John has been around since at least the mid-1830s, with the first mention coming about in Recollections of a Southern Matron in 1838.

While the etymology of Hoppin' John is debatable, some believe that it came about as a mispronunciation of pois pigeon ("pwAH pih-ZHON"), the Creole term for black-eyed peas. If you'd like a bit more context, check out this interesting article from History.com: Hoppin’ John: A New Year’s Tradition.

Since this recipe is a one pot, one pan meal, many southerners, particularly Cajuns, call this black-eyed pea jambalaya.  I have to agree that since the rice is cooked with the meats and seasonings, it fits the definition of jambalaya!  At my house, we don't care what it's called as long as there's a big pot of it on the stove come the first of the year.

Why Are Black-Eyed Peas Considered Lucky?

Black-eyed peas have been farmed in the US South since at least the 17th century. The crop itself is resistant to pests, disease and droughts, which in itself could be considered lucky when we think about early farming methods. Black-eyed peas are also extremely nutritious, and when combined with rice create a complete protein.

Legumes like black-eyed peas also help to affix nitrogen to the soil, which is a naturally regenerative practice and produces healthier crops in the next rotation of the field. In addition, the blossoms of black-eyed peas create large amounts of nectar, which, if grown in large quantity can be a good source of honey production.

While the many virtuous qualities of black-eyed peas seem lucky enough to me, Southerners are lovers of stories and traditions, and the origins of the humble crop's rise to superstitious fame are vast and varied.

Regardless of how it happened, Hoppin' John is traditionally served on New Year's day as a way to bring about good luck. Black-eyed peas symbolize coins in the Lowcountry, with some going so far as to even add a silver or gold coin to the Hoppin' John cooking pot to double down on the luck factor.

Some claim that the number of black-eyed peas in your serving of Hoppin' John is directly correlated with the amount of luck and fortune you will have in the New Year. Others say that you should leave three peas on your plate to bring about romance, fortune and luck.

Whatever you believe, I can guarantee that you'll sure feel lucky when you eat a big ol' bowl of this delicious Southern favorite.

What Are Some Other Lucky Foods I Should Make for New Year's?

Hoppin' John is a great, lucky dish for New Year's as it not only contains lucky peas, but also pork. Since pigs move forward as they root for feed, they are symbolic of progress. So, if you eat this yummy quasi-jambalaya, you're already covering your bases in terms of prosperity and advancement.

If you're looking to up your chances of good fortune in the New Year (or if you just want to feel a bit more Southern), here are some other foods you should be eating in addition to Hoppin' John:

Greens:  Green is the color of money, so any green vegetable, such as collard greens, turnip greens, cabbage, or spinach will suffice for financial prosperity. Now's a good time to give my Cabbage Casserole a try.  It's creamy and delicious with a cheesy cracker topping.

If you're looking to double up on the pork, I love good ol' turnip greens cooked with a ham hock. Check out this amazing recipe from I Heart Recipes: Soul Food Turnip Greens.

Cornbread:  Southerners eat cornbread on New Year's because of its golden color. I'd eat a whole pan of cornbread if I thought it would lead me to a pot of gold (or even if it didn't)!  I have a lovely cheesy jalapeno cornbread recipe that would certainly qualify in the gold category. Jalapeños add a touch a green color and spices things up a bit.

Circles:  I've heard circle-shaped foods are eaten on New Year's Eve as they represent the full circle of a year (the beginning and the end). Fish fall into this category because of their scales, but so do grapes, ring shaped cakes and donuts. Give me one reason to eat a donut, and I'm in!

Now that we've covered all the good luck foods us Southerner's love, let's get down to brass tacks about the ingredients you'll need. I'd bet you already have a lot of them on hand!

please scroll down to the actual recipe card for exact measurements

This cajun recipe has all the ingredients you've come to love about the dish:  black-eyed peas, smoked sausage, ham, rice, trinity (onions, celery, and peppers), chicken broth, and lots of delicious cajun seasoning.

To make things even easier on yourself - you just made it through the holiday season! - I've opted for a frozen version of trinity so there's less chopping involved, as well as a premixed spice blend for a little less measuring.

The frozen chopped onion, bell pepper, and celery blend is my all-time favorite time saver!  I use a bag of this stuff at least once a week, if not more.

If you're in the market for cajun spice, I love Tony Chachere’s or Slap Ya Mama seasoning blends.

Canned or boxed chicken broth also cuts down on the workload, but you can easily substitute your own homemade broth or some bouillon instead.

Finally, using canned peas is probably the biggest time saver of all. There's no pesky sorting or soaking involved, and the peas are already cooked to a perfect al dente.

That said, if all you have on hand is fresh or dried peas, use them! I'd recommend 2-3 cups for this recipe. As I said earlier, I prefer Trappey's but I also love me some Glory Foods Blackeye Peas:

You can also easily substitute field peas or crowder peas if you can't find black-eyed peas at your store. You know how it goes! The closer you get to the holidays, the harder it is to find traditional ingredients in stock.

Don't worry though; field peas and crowder peas are still considered quite lucky.

How to Make It

please use the actual recipe card for in-depth instructions.

The first thing you'll do is brown the sliced sausage in olive oil.  Use a large (at least 5-quart), heavy pan with a lid.  As you can see, I always grab my Calphalon pot for this recipe and many other recipes as well.

Remove the sausage from the pan, and add the diced ham.  Brown for 5 minutes.

Add the frozen vegetable mixture (or fresh vegetables) to the pot with the ham.  Simmer uncovered for 5 minutes. Use a spoon or spatula to scrape the bits and pieces that may have adhered to the bottom of the pan and incorporate them into the ham and veggie mixture.

Tip: Don't add any salt to the mix until you have tasted it first. Ham and sausage both have quite a bit of salt naturally, so you don't want to overpower the mix!

Bring mixture to a boil. Lower the heat to medium-low and put the lid on the pot.  Simmer for 10 minutes, remove the lid, quickly stir, then replace the lid on top.  Turn heat down to low and slow simmer for an additional 20-25 minutes. Remove from heat and let rest, covered, for 5 minutes. Enjoy with all the lucky fixin's!

Can I make it ahead of time?

If you're really getting ahead, you can also freeze your Hoppin' John.  I have some in the freezer at this very moment.  Placed leftovers in a freezer-friendly container (or zip top bag) and freeze for up to 3 months.  When ready to eat, thaw and heat in the microwave.

Fun Fact: Leftover Hoppin' John is referred to as Skippin' Jenny! If you eat Skippin' Jenny as leftovers on January 2nd, your frugality is supposed to further ensure that you'll be prosperous in the New Year.

Serving Suggestions and Side Dishes

As I stated earlier, there are all kinds of goodies to serve with it.  Cabbage, greens, and cornbread are just a few lucky and traditional sides!

Is this recipe for Hoppin' John or Black-Eyed Pea Jambalaya?

Good question! It's both, depending on what you like to call it. No hard rules here.

Can I Make it Vegetarian?

Of course, yes, it's very easy to convert to a vegetarian recipe.  Mainly, leave out the sausage and ham. Use vegetarian peas (not flavored with bacon or ham).  Use vegetable stock instead of chicken broth.

Also, I suggest using melted butter instead of olive oil (mainly because butter adds additional flavor since there are no meats). If you're going vegan, opt for vegan butter instead.

Finally, if you need a bit more "oomph," you can add additional flavoring by adding about a teaspoon of liquid smoke and up to a tablespoon of nutritional yeast.

Need more Cajun comfort food inspiration? Check out some of my other favorite recipes:

If you tried this deliciously easy recipe, please be sure to let me know how it turned out in the comments below!

Join my email list to get a variety of recipes sent to your inbox.  How easy is that, right?! 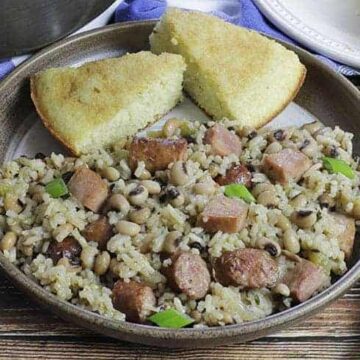 You're going to love this easy hoppin john recipe with canned black eyed peas, ham, and sausage!  As an added bonus, it's one pot, one pan!  The rice is cooked with the other ingredients to soak up all that delicious goodness!
5 from 1 vote
Print Pin For Later Rate
Course: Main Course
Cuisine: American
Prep Time: 10 minutes
Cook Time: 45 minutes
Total Time: 55 minutes
Servings: 8
Calories: 268kcal
Author: Anne Clark

Note 1:  If using fresh vegetables, use the following measurements: 1 cup diced onion, 1 cup diced bell pepper, and ½ cup chopped celery. Note 2: Cajun seasoning (Tony Chachere’s or Slap Ya Mama). Note 3:  Go easy on the salt since the sausage, ham, and cajun seasoning already have salt in them). Store leftovers covered in the refrigerator for up to 3 days.
Tried this Recipe? Tag me Today!Mention @mykitchenserenity or tag #mykitchenserenity on Instagram!!

Hi! I'm Anne, the founder and content creator at My Kitchen Serenity, a food blog focused on serving the needs of busy moms and dads who are looking for easy and delicious recipes for the family.

Hi. I’m Anne and I’m happy to share with you my easy, family-friendly recipes. I’ve been cooking for my family for 30 years, and what I’ve learned is that most busy families appreciate easy homemade meals. Now that the kids are grown, my passion is creating and sharing flavorful food for you and your family to enjoy as well. If you have any questions, feel free to email me at [email protected]

I’d love to hear from you! 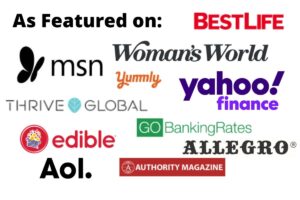